Share a memory
Obituary & Services
Tribute Wall
Read more about the life story of Maureen and share your memory.

Maureen Ellen Menke, 82, of Lawrence, passed away Sunday, November 27, 2022. Rosary will be Saturday, December 3, 2022, at 10:00 a.m. and Mass will follow at 10:30 a.m., both at Sacred Heart Catholic Church, Lawrence, Nebraska with Father Corey Harrison officiating.  Burial will be at St. Stephen’s Catholic Cemetery, rural Lawrence, Nebraska.  Visitation will be from 3:00-6:00 p.m. Friday, December 2, 2022 at the Lawrence Visitation Chapel, Lawrence, Nebraska.  Memorials are suggested to the family to be designated at a later date.  Private condolences may be sent to the family at www.mertenbutlermortuary.com.  Merten-Butler Mortuary, Blue Hill, Nebraska is in charge of arrangements.

Maureen was born to Rudolph F. and Marie J. (Dolnicek) Faimon on the family farm in Webster County on January 1, 1940. She was the 11th of 17 children.  She attended Sacred Heart Catholic Elementary School and graduated from Lawrence Public School with the class of 1957.

She was united in marriage to Adrian G. Menke on January 21, 1958, in Lawrence. To this union were born nine children. The couple lived on a farm south of Lawrence.  Maureen was a homemaker for many years before working at the nursing homes in Nelson and Blue Hill. She also worked at R & K Service in Lawrence. She was a member of the American Legion Auxiliary, St. Stephen’s Altar Society, volunteered at the schools, coached baseball in her youth, and coordinated the Red Cross Blood Mobile for 13 of her later years.  Maureen loved farm life, bowling, the outdoors, and music.  She cherished her time playing cards and games with friends and especially grandchildren at family functions, and following her children, grandchildren and great-grandchildren in all of their activities.

To send flowers to the family or plant a tree in memory of Maureen Ellen (Faimon) Menke, please visit our floral store. 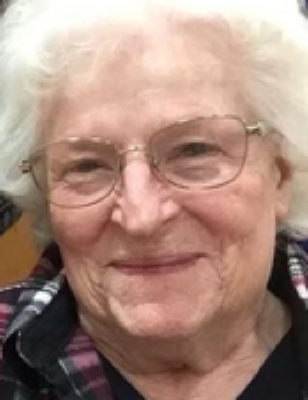